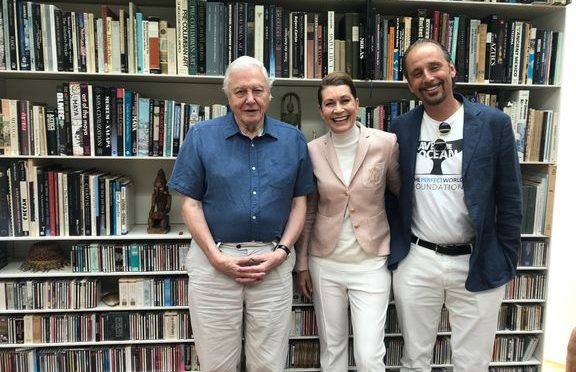 Sir David Attenborough is possibly the world’s most famous presenter of nature documentaries. On September 6th. The Perfect World Foundation will be hosting a gala in Gothenburg, in support of earth’s nature and wildlife. Sir Attenborough, the evening’s guest of honour, will be awarded the foundation’s honorary prize presented by the Duchess of York Sarah Ferguson. Sir David Attenborough has become internationally renowned for his characteristic storytelling in nature documentaries such as, among many, Planet Earth, and Life on Earth. On September 6th the 92-year-old Sir Attenborough will be visiting Gothenburg to receive The Perfect World Prize during the foundation’s yearly gala in support of nature and wildlife.

“Through his work, Sir David Attenborough has given wildlife a voice and raised interest for nature and wildlife world over. It is a great honour to have him as our guest,” says Ragnhild Jacobsson, CEO and founder of The Perfect World Foundation.

The non-profit organization The Perfect World Foundation annually organizes a support gala in Gothenburg, to address concerning nature and wildlife issues. This year’s focus is on polar bears, climate change and the ever faster melting Antarctic ice. Each year The Perfect World Prize is awarded a person who has made a significant contribution to the conservation of nature and wildlife. Sir David Attenborough will become the fifth honouree to be awarded the prize; previous recipients include Dr Sylvia Earle, Dr Jane Goodall, Dr Richard Leakey, and Mark Shand.

Celebrities gather to pay tribute to David Attenborough
The British Duchess of York Sarah Ferguson entered the limelight in 1986 when she married Prince Andrew. Today she is one of The Perfect World Foundation ambassadors and will be presenting Sir Attenborough with the foundation’s honorary award. Also, Shannon Elizabeth, who performed with a role in American Pie (1999), Nobel Peace Prize winner (2007) Rajendra Pachauri and The Game of Thrones-star James Cosmo will go on the red carpet to the support gala at Elite Park Avenue Hotel in Gothenburg.

“Many want to join the celebration of Sir David Attenborough. We’ve already received several offers from well-known artists who want to perform, free of charge, during the gala evening,” announces Ragnhild Jacobsson.

“We want to raise awareness around the seriousness of the climate change. Our oceans are filled with plastic waste, coral reefs are dying and soon several of our great mammals are extinct. Through the conference and gala, we want to inspire, people and companies, and encourage involvement in the climate issues,” concludes Ragnhild Jacobsson.

Short about the gala
The Perfect World Foundation has since 2014 organized three support galas in Gothenburg, which have all raised significant funds for animal and nature projects worldwide. Dr Sylvia Earle, Dr Jane Goodall, Dr Richard Leakey, and Mark Shand are previous recipients of the foundation’s honorary award. The prize is each year awarded a person who has made a significant contribution to the conservation of nature and wildlife.